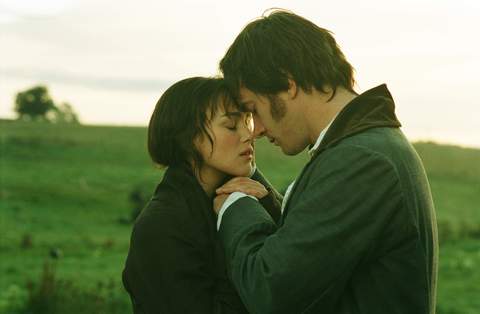 People have said that Pride and Prejudice is one of the greatest love stories ever written.  I would agree.  But who wouldn't?  I  have yet to meet anyone to the contrary.

[However, the Mr. Collins in the Colin Firth version is COMPLETELY irreplaceable.]

It was like connecting with an old friend.  I cried and cried  because it was so lovingly-familiar and, well, I just felt right at home amongst the Bennets.  Their pain was my pain, their joys, my joys.  Consider me an honorary 6th sister.

There's nothing like a break from the mundane to swoon every once in awhile.  I love to swoon.  And how could you not in the early morning dawn, while the handsome Mr. Darcy walks with such determination towards you, coat swaying behind, shirt open at the neck, smoldering with love, saying, "You have bewitched me body and soul"?  You've bewitched me, too, baby!

Those were the days, ladies.

Those were some mighty fine days...

I LOVE Pride and Prejudice! I would agree with you 100% it is the best all time love story.

I have read what you have written before about the 6 hour version and I am totally interested...I will have to track it down on netflix sometime.

How are you? From your blog life looks wonderful. Know I am wishing you well, and many more romantic movie watching days.

I am laughing! We (me, Casey we even have Tanner hooked, but don't tell anyone!) just watched this a few days ago. Casey and I both quoting "You have bewitched me body and soul?"

I feel the same way about the Colin Firth thing! I am still laughing!