A chat in the dark.

Each night before bed, Ben and Brigham laboriously go through Brigham's math homework.  They are both math whizzes.  Ben is determined to teach Brigham to s-l-o-w down.  He rushes and makes silly mistakes sometimes.  In my right-brained opinion, a little too much math can make ANYONE testy.  Brigham got a little testy.

When Brigham's upset he becomes self-defeating.  This stems from a strong desire to please, not only himself, but us.  He's a perfectionist.  He's a first-born. 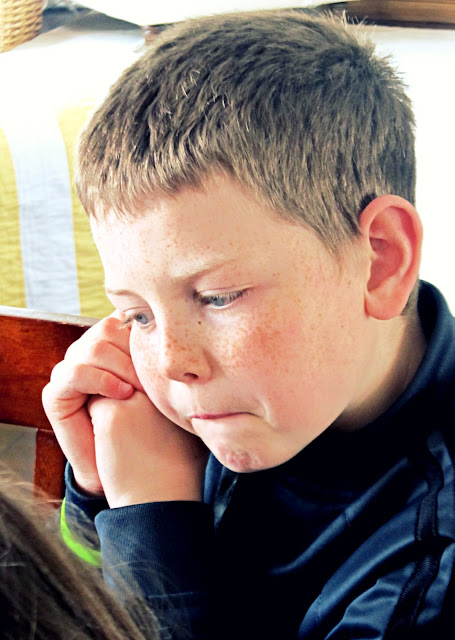 He went upstairs to bed.  Sam was crying, so I went up to see if he was okay.  Brigham was laying on the couch with his pillow and a blanket.  Why anyone would choose a couch over a bed is beyond me?  I seized this moment to have a little heart to heart with Brigham, in the dark, nursing Sam.  Very non-threatening.

Brigham said there was a kid on the playground who called him "Freckle-face" yesterday (personally, I think freckles are cutie-patootie, but I'm his mom, it doesn't count).  Obviously, this was still bothering him, or he would have forgotten about it and moved on.  I shared with him a lesson I'm still learning:

Often, when someone is hurting or insecure they put others down, supposing it will make them feel better about themselves.  It usually has the opposite effect.  And when someone is doing that, then is the time when he/she needs love the most.

We were reading in the Book of Mormon and it said, "Awake, my sons; put on the armor of righteousness."  Loving someone when you feel they are least deserving of it is part of wearing that armor.  My boys love allusions to armor and battle and fighting evil in the scriptures.  It's tough and masculine.  It's anything BUT boring.  One day, I know they'll see the purpose of those allusions.  For now, I'll let them make their manly-grunts during scripture time.  Anything to keep them focused!

I challenged Brigham to make the situation positive, try to make freckle-face boy his friend, or at least show him it's okay to be friend-LY.  I'm not sure if he will, maybe he'll just avoid him.  But, at least Brigham is armed with a Truth.

Hopefully something beautiful will grow from our little chat in the dark.
at 6:48 AM

good job mama.
And I think their freckles are adorable too!!! and i'm not their mom, so there! that counts!