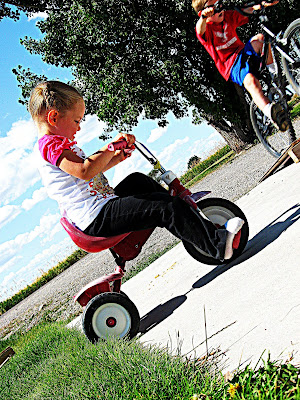 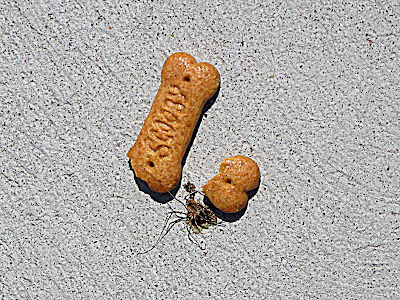 I was watching the boys show off their "skills" on their homemade bike jump. Minutes later, here comes Annie, assertively planting herself directly in front of the jump, so as to prevent anyone else from going before she had a turn.
As proof of her powers (Jedi mind trick? I did see her wave her hand in the boys' direction.), she got her way. Four boys, all twice her size, waited patiently, while I helped her over the jump. That's my girl.
In case you're wondering about the scooby snack next to the spider-that-once-was...Brigham purposely ran over the poor thing, and Annie, sympathetic soul that she is, gave the spider a scooby snack to ease the pain. How thoughtful.
at 9:41 AM

That was very Christ-like little Annie. I wish I knew you!

OH Lanette, your blog is too cute. I love all the pictures and reading the way you so eloquently write your words. Seriously, so creative. the pic of Annie in the tube in the kitchen was too precious. Good job. I love looking at your blog!

Are you picnik-ing your photos? They look so great!!

ok - that spider looks like it was HUGE. EW - i'm seriously freaking out just looking at that. WAAAAAAAAAAAAAA - i'm scared of spiders.