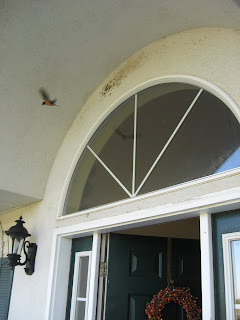 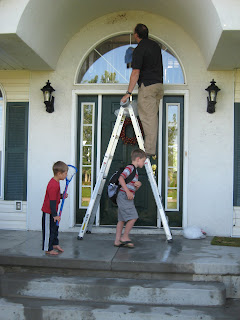 Guess who won?
We are at war with a little swallow family. Like me, you may think these little swallows are cute and beautiful and interesting (how they build their little mud nests), but you would be wrong...
They are persistent and fiesty and aggressive!
Normally, I would love watching a bird family build its nest on/near our house. They just picked a bad spot. I was not going to deal with bird poop on my front porch all summer long. Our neighbors had swallows build a nest on their porch light and it would attack anyone who came close. Call it mother-bear syndrome. I didn't want that kind of fight.
Multiple times each day we'd spray it down, and multiple times they'd rebuild. Finally, Ben took charge. With four angry swallows making threatening passes at his head, he attached a piece of plastic above our front door and sprayed it with vinegar (don't ask me why he used vinegar. He thought it might smell so bad, that they wouldn't want to build there).
We fought a good fight, and the swallows have found a new home. I wonder if they'll try again next year? Poor little fellas. It's hard being the little guy.
at 4:06 PM

Shawna McDonald has a bird family that built on her front porch and when I walk up to the door it totally flies at my head! I'm glad you took care of the problem. :)

hey there! I just made our blog private and need your email address to make you a reader, can you email me at melissadenham@cox.net

good job. I honestly have a true fear of birds. glad you won.

Birds freak me out when they're too close...dear, brave Ben. Way to take care of the fam!