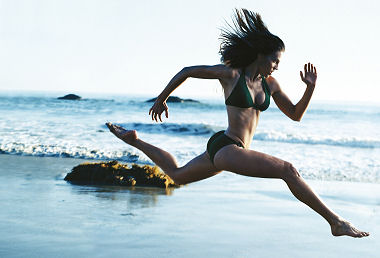 (Yep, that's Hilary.  For reals.  Covet, covet.  I know.)
Mind over matter.  I realized that lately I've used some pretty random techniques to get me through my runs.  One night it's Beach Boys.  Beach Boys.  No joke.  I laughed out loud running to that album because it was so fun, so another time, so funny that The Beach Boys got me home.  "Wouldn't it be nice if we were older, than we wouldn't have to wait so looonnnggg."  Those were the days.  Now, they'd forget waiting and just get it over with, right?

Sometimes I wait for different dogs to join me along the way.  I used to call them all Boy and I said it in a kind, peppy sort of voice because I was afraid they'd attack me.  After awhile, I learned that they were ALL girls.  Impunity.

Tonight, it was Hilary Swank.  Rock-solid Million Dollar Baby Swank.  Girl Power.  If she can do it (pretending to be someone else), than I can too.  Still, she's totally ripped in real life.  Sometimes I need to remind myself not to covet.  But heck, I totally covet her body.  But that's okay.  I can be soft and sweet- spirited.  It's not the end of the world.  But in the next life, I'm Hilary Swank.

So I figure, Hilary or The Beach Boys, or dogs, whatever works, right?
at 9:07 PM

Or going to the gym with your awesome amazing cousin right?!?!?! I didn't see that on there. I'm going to have to borrow some of those c.d's to help get me going on the treadmill! Are you totally dying for lifting on Monday, I swear I lift my arms and my thighs, holy cow!!!! Oh, could you tell it is 4:06 in the morning, I still haven't been to sleep!!!!

I must be mistaken but I thought you were my cousin named Hilary?

ew. you are a million times more beautiful than hilary swank. i think she looks like a man. i know - i'm nice. but ser - you are beautiful. not her. you. :)

I know you think that is Hillary but really it's me. They just photo-shopped her face on to my killer body :) (ha ha ha ha ha) One day maybe :)