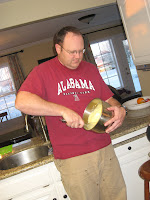 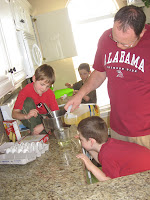 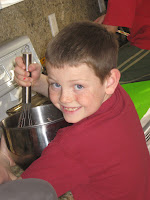 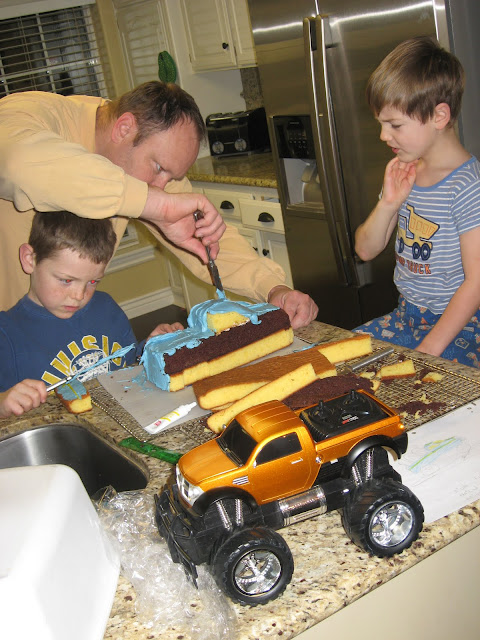 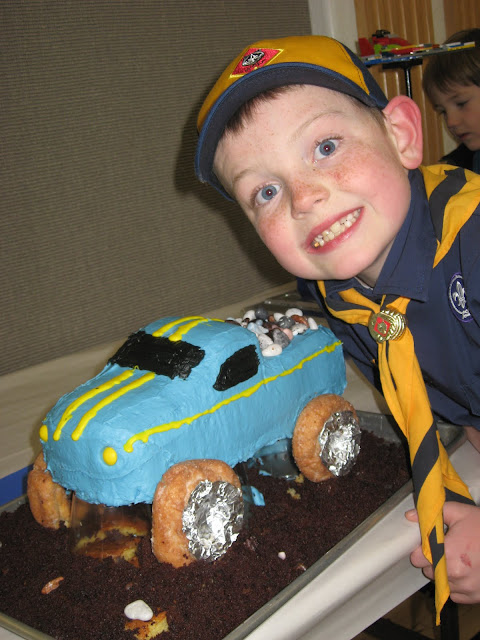 We had our Cub Scout Blue and Gold banquet last night.
In addition to the regular meeting, we had a Father and Son's Cake contest.
What an adventure.
Many nights were spent listening to Ben and Brigham hash over ideas:
haystacks, yoda heads, cars, etc.
They settled on a monster truck.
The night before they made the cake, Ben whipped out his ruler, taking measurements of Brig's remote control monster truck--"so everything can be to scale," he said.
I rolled my eyes.
It's like the pinewood derby--cake style.

They made the cake on Tuesday.
Froze it.
Woke up at 6am on Wednesday, shaped it, frosted it.
Voila.

They were so proud of themselves.  I love when I can see in my kids' eyes that they are pleased with something they've done.  Especially Brigham, because he dwells on the areas where he falls short (or so he thinks).  He couldn't wait to show off his cake.


The Blue and Gold was fun.  Funny.
However, we had an accident.
The cake was on the stage while we cleaned up.
Annie accidently pushed the remaining part of the cake OVER THE EDGE!
Brigham was devastated.
He wanted to cry, but didn't because other people were around.
He waited until we got home, climbed on my lap, and cried silent tears on my coat.
His poor little heart.  My poor Mommy heart.
Brigham gets some pretty tough breaks sometimes as the oldest.
For now, we'll have to glory in our pictures.
Next year, we'll keep our eye on Annie.
at 8:26 AM

Awesome cake! Ryan did a Jeep cake for Clay for his 3rd bday - so much better than I could ever have done. Way to go, Father & Son!

He sews, he bakes, what else?! You've got quite the domesticated husband.

I bet you're glad the banquet's over.


I have ever seen.