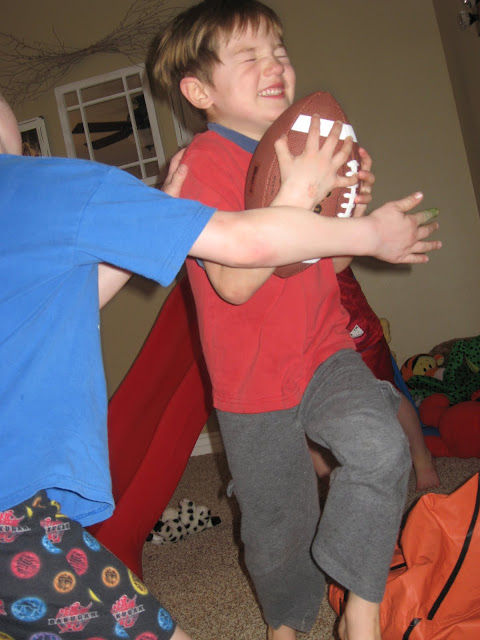 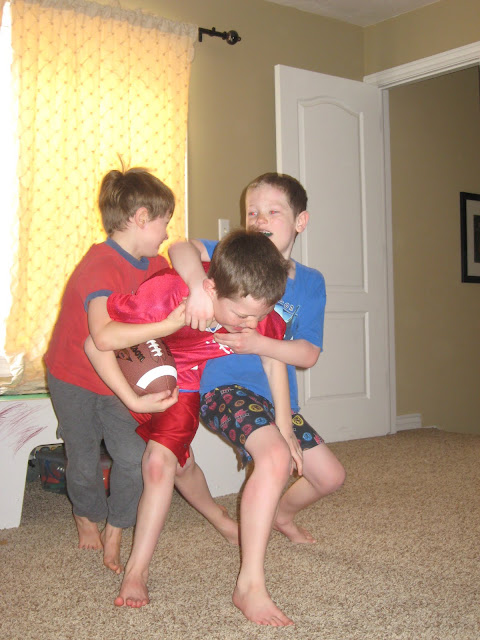 Parents are fallible.
I knew this was true.
I've learned two tremendous lessons these past two weeks.

1.  Brigham taught me something, and I'm glad he's my first--so I don't screw up the others.  As a kid gets older, his needs change.  I knew that.  I used to put the boys all in one mold.  The boys.  They did this, they did that, always together.  Well, Brigham doesn't want to be treated that way anymore.  He's growing up, testing his wings, whereas the other boys are still content where they are.  Brigham wants his own space.  He doesn't want his things messed up.  He's meticulous about "his" stuff.  Not OCD, just more careful, responsible than the others.  He wanted us to treat him as an individual and to share grown-up ideas with him about the world and spirituality.  Before I realized these things, Brigham started closing off.  He wouldn't share as much with me.  He always seemed down, frustrated, impatient.

I prayed and prayed about this little guy.  I finally got my answer.  We started treating him like a responsible, semi-grown-up kid.  We changed rooms.  William and Lincoln are together.  Brigham's on his own.  We gave him a later bedtime.  I started giving him more responsibilities with Annie.  I guess we just gave him more responsibility for himself.  That's exactly what he needed.  Brigham has blossomed.  You always love your kids, but I really "like" Brigham, too.  If I could be as sure about the others like I am about Brigham, I sure wouldn't worry as much.  Let's just say that Brigham was born with an obedient little spirit, whereas, the others, well . . .

2.  This lesson isn't quite as dramatic, but for my sanity it was a MIRACLE.  A tender mercy.  As most of you know, Lincoln is constantly giving me a run for my money.  I also know that his heart is truly as big as his antics, that's the redemptive part of it all.  Just as I was learning to give Brigham more freedom, I thought about changing Lincoln's bedtime.  Earlier.  Remember, I'd always done everything the same with the boys.  We started putting Lincoln to bed between 6:30-7pm.  I know, that sounds really early, but we did it anyway.  It is amazing.  He goes willingly.  There's not a fight.  He STAYS in his bed, reads his books, turns over and BAM, asleep.  Holy cow.  I couldn't believe it.  I thought he'd fight us like crazy putting him to bed before the others.  I was wrong.  So much of our trouble with Lincoln probably stemmed from his DAILY exhaustion.  Poor little fella.  He was begging us for bedtime by acting out.

I'm so grateful that we don't have to raise our kids alone.  God knows them better than we do, I've no doubt about that.  He'll show us what His children need.  Why wouldn't He?  Nothing is more important.  Sometimes I forget and struggle and struggle, without knowing what to do.  Then, when I'm desperate enough, I get on my knees.  Stupid me.  One day I'll figure it out and save my children from thinking their mother is CRAZY:).

I love peeking at your blog. You see your life so clearly. You learn your lessons so well. I'm sure there must be a lot of pondering and reflecting that goes on in your mind. I wonder where the Lord will take you with your oh-so-teachable sprit. You strengthen me.

Thanks for sharing, Lanette. Great lessons and reminders! :)

Good lessons. Thanks for sharing :)

oooohhhh, what did the deleated comment say????? I'm not nosey or anything... :D I thought I was the only one who always forgot to kneel when I couldn't stand life anymore. We are so much alike...was that offensive :D

I wish I knew who the deleted comment was from, too. Notice, it says it was deleted by the author...not me. Curious...

I love those tender mercies & tender moments where the Lord opens our understanding & tells us what we need to know. I too am so grateful for the fact that we don't have to try & figure out how to raise these kids, we simply get on our knees & are guided every step of the way. (If only we made it that easy.) thanks for sharing Lanette. You are great.

oh my gosh - i can relate to both those. i'm in the process of trying to let hannah grow up and have more responsibilities and not always grouping her and nats together. it's hard. very hard :(

and with the earlier bedtimes - AMEN. it makes all the difference in the world when they get the rest they need. AMEN to that.