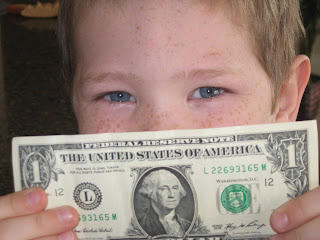 Bribery and child-rearing go hand in hand...um...not really, but I thought I'd give it a try. As you know, William doesn't like PB (so he says). Well, on this particular day I was not willing to compromise (however, I'm not opposed to letting them starve if they won't eat what's prepared). He just cried and cried, he would starve and be sad and wouldn't eat ANYTHING at all, he would just starve to death...for real, he would!
So...I did it! I sunk to the depths of parenthood-guilt and said, "Hey, Will...if you eat that sandwich, I'll give you a dollar." I say guilt. Yeah right, I wanted him to eat that sandwich! Whole sandwich= $1, sandwich-crust= fifty cents, no sandwich= $0. He did the math. He ate the whole sandwich and got his dollar.
I asked, "So, Will, did you like the sandwich?"
"No, not really."
"Why'd you eat the whole thing then?"
"'Cause I wanted the dollar."
"Oh, that makes 'cents' ."
We don't raise no dummies.
at 1:34 PM

Hey whatever works, right!? we've also succumbed to bribing...sometimes it's the only option! :)

bribing? we call it... blessings. (It makes me feel better when I tell them if they obey they'll be blessed... with a dollar, or a lollipop, etc.) Yup. It TOTALLY works.

Use reverse psychology, but since they don't have any money.... So every time they don't eat they get to pick a "suprise" out of a hat and that is what they have to clean. I did take child development classes ya know...which means I really don't know much at all. Good luck. Maybe you should write a book and then when I have kids I won't have to go through this trial and error things! :D Love you!!!

A bribe is when you personally benefit.

Incentive is when the person (not you) benefits.