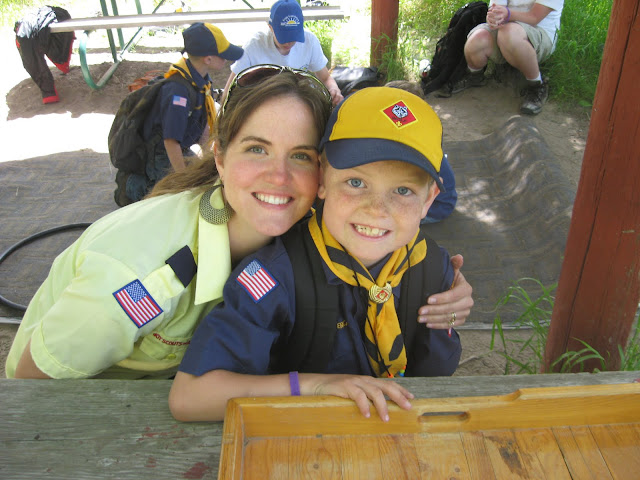 If ya got, ya got it.
If ya don't, well, don't try.
And don't even think about scoring points with Cub Scouts.
They're never gonna think you're cool.
You're a mom.  A has-been cool mom.

And when it comes to the Feats of Skill section, Achievement 1, well, I've heard that has-been cool moms shouldn't demonstrate the backward roll.
So I've heard.

And don't try to show off by prefacing your demonstration with, "When I was in gymnastics we always had to jump in the air with our hands above our heads before assuming the 'rolling position' and that would give us the momentum on the way down to push ourselves all the way over."
Just don't even say that.

Oh, and I've also heard that women with long hair should not leave their hair down while attempting said demonstration because it gets caught under their knees after they roll over and they can't lift their head because it's stuck.  And then they scream because it hurts so bad, but the embarassment hurts even worse.
A two-fold scream.
So I've heard.

And one more thing.  I've heard that whilst performing such a dangerous roll one can severely pull a muscle or pinch a nerve in her shoulder and neck that causes intense pain for DAYS afterwards.  Some people even have to sleep with their faces in their mattresses, without a pillow, because every other position hurts.

OH my goodness...you are too funny...the whole time i am reading this I am laughing. Not at your pain or embarassment. I just love the way you write. (p.S. I hope your neck and shoulder are feeling better) :)

Oh the things we used to be able to do - I'm so there with you! Hope you feel better soon!

I'm giggling out loud, too. Sorry your neck is hurt! I'm sure he LOVED your efforts! :)

I'm so glad that you are sharing your experience of what you've "heard". I'll be sure not to try that. :)

You crack me up!

SO great. Love the picture too. You really rock that uniform.

You are such a great writer. I could see and feel your pain! So sorry!
Hope you are feeling better!

Ha ha! Why dod I envision myself attempting back flips at the rented bounce house at the recent family reuion. A bounce house is not a trampoline. You just can't get enough bounce. My knee hurt for a few days.