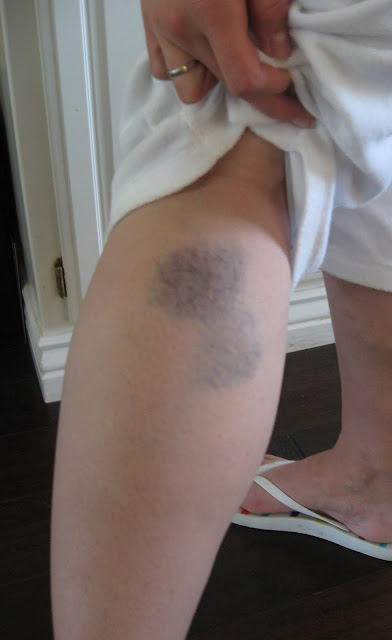 Attack of the killer cub scouts . . .

I'm having a slight identity crisis.  Help me through this.  Here's the issue: as we age and meet in groups, the women tend to sit around chatting and the guys and kids play.  Well, I want to play, too.  Granted, sometimes I love to chat, but why do we woman feel like we can't get out there and revel in the competetive spirit right alongside the guys?  I admit I've lost the "edge" in my competitiveness; I think being a mom and having to give up/give in so often will do that to you.  BUT, I still love a good, rowdy game.

I run into this problem on Thanksgiving, too.  The guys go play football while the women get the meal ready.  Why?  Why can't we play then get the meal ready?  I'm guessing that the guys are glad we don't step in there because then they'd have to be more careful.  No more asserting their machismo 'cause we might end up in the hospital with a broken arm or something.  And then who'd get that turkey ready?

Well, it's a real bum deal.  I'm choosing to rebel against the stereotypical male/female roles.  I'm gonna keep on playing because sometimes I'm hungry for a little sweat, a little trash-talk.  Does that make me masculine, butchy?  Frankly, if I was a guy I'd think it was pretty sexy (I wonder if Ben thinks it's sexy?) . . .but I'm not a guy, so what do I know?

Nice bruise! There's nothing wrong with wanting to play sometimes! There would be something wrong if you wanted to play all the time and go out with the guys while Ben stayed home every night with the kids and made all the dinners and did all the laundry and started French Braiding Annie's hair. Then I would worry! :) Have fun playing.

Totally AGREE!! It's just a part of our womanly makeup that wants to get out there and fight a battle. We are not boring creatures at all, and a lot of times we are more competitive than the guys. Get a RS together and play ball and we'd all be surprised! Ha ha...love your posts!! Hope you guys are doing great!

I love to play and get dirty and yes I do clean up nicely looking like a pretty girl on Sunday. But I would much rather play in the dirt or on a field than sit around and gossip! You go girl. Play strong, play hard. Have fun and just play! Play with the boys...

BTW-- I love the bruise!

i'd rather make thanksgiving dinner (aka: dip rolls into gravy and chat to whomever is actually making the dinner), than to go play football.

Yikes! I love you Lanette! I like your way of thinking! I have to agree, I'm not the one wanting to sit around & chit chat when there is a good game going on & I can surprise some guy by my throw. They can't say that I throw like a girl. :) Hope you heal up quickly.
We need to play some tennis soon. I'm itching to play.