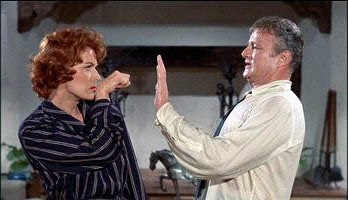 I used to fight with my brother.  Well, not fight exactly, but tussle.  We'd sit on each other, punch each other in the arm, or have "smart wars."  Example: "Hey, Net, betcha can't spell RECONCILIATION."  Seriously.  I can still remember the day I could finally spell R-E-C-O-N-C-I-L-I-A-T-I-O-N.  Then he moved on to math.

Yes, we'd "fight," but I always knew Eric had my back.  He could pick on me, but if anyone else tried, he was there...on my team.  In fact, the closest we came to a real fight was a complete reenactment of The Parent Trap (1961), where the stunning Margaret O'hara awkwardly socks her husband in the eye.  I remember putting my arm just like hers because, come on, I'd never REALLY punched someone before.  I remember thinking, "Hmm, I wonder what it would be like to really hit Eric."  It was more curiosity than malice.  I did it!  Not hard, but with a fist.  Afterward, Eric looked at me, stunned and hurt (feelings).  He said, "Net, you just...just hit me."  It was awful.  I felt awful.  I never did that again, not even close.

I realized at that moment that our fighting stemmed from boredom, or the safety that, sure, we could beat on each other, but in some twisted sense it was our way of expressing love, security, or that regardless of our hand-to-hand combat, we never doubted our love as brother and sister.  Our wills and our pride were much too strong in our youth to hug and kiss so...we punched each other in the arm, right?  Love.

My boys.  Fight, fight, fight.  Well, it's more like Brigham and Will vs. Lincoln.  How can they fight and make each other cry, then start playing a second later?  It's called boys and it's called brothers.  Three brothers close in age.  My soul hurts when I see them hurt each other...most of the time.  (Sometimes I wish I could say, "Well, kiddo, you mess with the bull, you're gonna get the horns.  Stop pushing it.) This must be how my mom felt.  I feel like a broken record, trying to teach the "better way."  Problem solving, conflict resolution, what would Jesus do?  We're all children of God, blah, blah, blah.  I tell myself that even if they don't appear to be affected by my stellar teaching, it's sinking in.  As a parent we have to hope.  I'm choosing to hope.

So, the next time you see my kids and Lincoln has another HUGE scabby, rope burn across his neck because his brothers clotheslined him while he was riding his bike, trying to go on the jump they built (just for them), say to yourself, "Wow, those boys must really love each other."  And then say a prayer for them, alright? 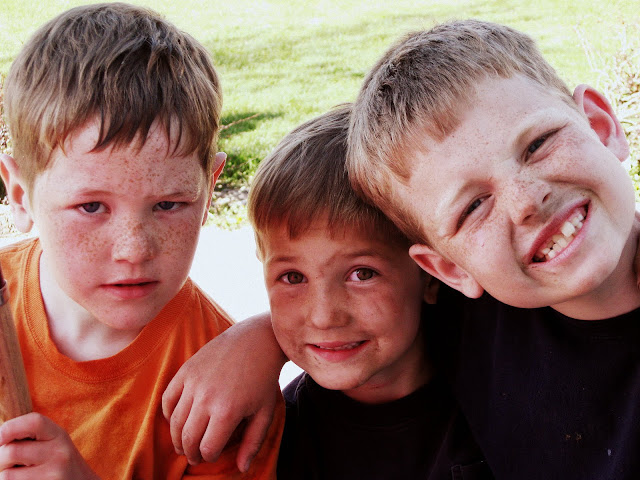 I love their freckles!

Kimberly and Benjamin are the same way. But I grew up and stopped fighting my brothers and sisters so I can only hope that the same will happen for them. Cute kids!

they are so lucky to have each other! i often think linus should have a brother. . . but no. he'll survive, right?

You killed me with this one!!! it was awesome!!! Eric adores you and I know your kids love each other like crazy. I'll pray for yours and you pray for mine!!!! because I feel the exact same thing every time Sean punches Patrick and this little guy kicks him back!!! Oh nooooooo!!!!
Anyway, you really made me laugh!!!
Love ya!

Netty-Poo - I just found your blog and read lots of your posts. You are very talented in writing and in expressing things so "the way they are" Reading made me smile and think about being your roommate. .. so many years ago! I just love you and I am so grateful for you. I've always looked up to you! Thanks!