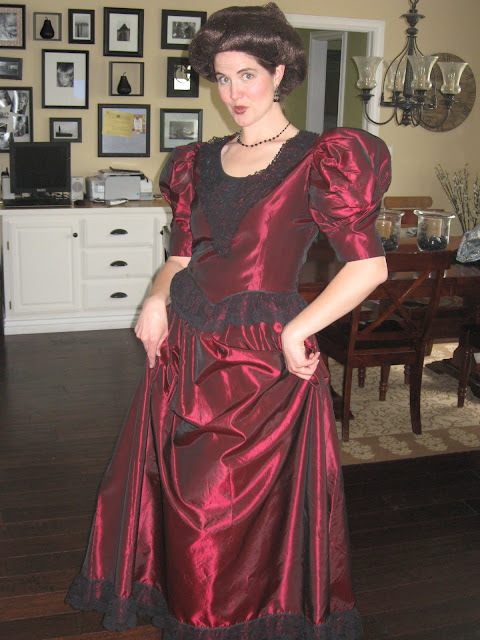 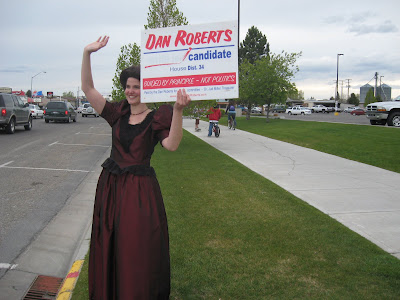 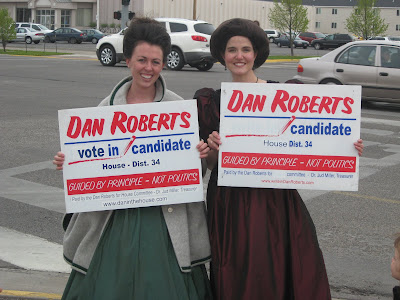 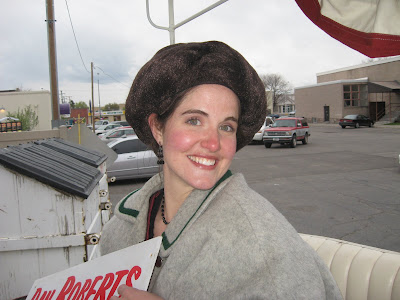 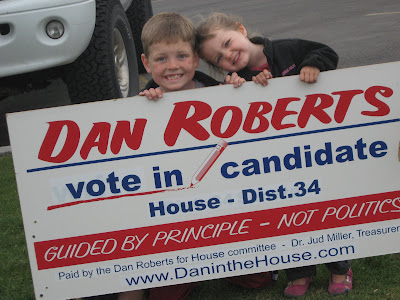 Don't think I've gone off the deep end.  Just look at what I did last night as an attempt to live life with no regrets.  Haven't you ever wanted to be involved in a political campaign you believed in, were excited about?  I have.  All my grown-up life I've felt drawn to these things.  I want to be an informed, involved citizen.  Isn't that our responsibility?  Yet I never knew where to begin.  To make a long story short, I didn't have to look far.  A friend of ours decided to run for a house seat.  He is very principle based, very educated about the history of our nations founding and the Constitution, very much in favor of limited government, state's rights, personal liberties, etc.  I love his vision, I think he would serve our district, our state, extremely well.  I went so far as to write a letter to the editor of our local paper supporting him.  But that's not all...

Friday, Dan was looking for people to dress up as colonial characters, founding-fathers-ish, to walk around downtown promoting his campaign.  I told him I'd help.  Adding to the humor of the experience, I had to give him my dress size so he could rent a costume for me (my first thought was to lie and say, "Um...a 6 (giggle, giggle)."  Vanity...ah!).  Awkward, but hilarious!

Call me Martha Washington (or Marilla Cuthbirt or any other Victorian-era woman, since the costume looked more "victorian-y" than colonial.  What can I say, it's a small town, we did our best).  I've always wanted to "dress-up" and we had a blast.  Lots of honks and waves, a few cat-calls, phone number requests to which I replied, "We're MARRIED...WITH CHILDREN!"  They felt stupid, I'm sure (but at least we still "got it," if you know what I mean...ha).

That night, I lay in bed thinking about the fun I'd had.  And not just fun.  I'd DONE something, not just THOUGHT about doing something.  I've taken the first step and hope it won't be my last.  And to top it all off, my kids were able to see their mother actively involved in a noble cause.  I don't want them to forget.

oh my sweet little cousin, you make me laugh. What a great experience that empowered you so much. I think you are great and way to be an example to the rest of us and to stand up for things you believe in.

Hey, a certain author that we both love and are secretive about is coming to IF for a signing. You want to come?

That is awesome! I wish I could have seen it in person.

*Do you really think he knows what your dress size means? And if he does, do you think he cares? I'm betting not :)

Woot-woo! Look at that perdy lady! :)

Oh, for cryin' out loud. Your blog is awesome. I've sat and read and read and read for a while now and love it. So well written and completely entertaining! Excellent. I'm so glad I ran into you and Shelley this morning! Can't find your email anywhere though... Email me for an invite. marybrunson@gmail.com.

you do look hot, I am sure the men were sad you were married with kids!