Run for your life!

I did it.  My big race.  My very first half-marathon.  All I can say is--and I don't mean to be sacrilegious, but--IT IS FINISHED.

I don't really know where to start.  It seems like I've spent an eternity thinking about it, preparing for it, worrying over it, and now it's done.  Finished.  Over.  It's kind of an emotional thing for me.  I know, I know, it's not a big deal to some, but to me it represents a big step.  A progression in the person I WANT to become.  A finisher.  A hard worker.  A never-give-up-er.  A person who can set a difficult goal, stick with it, and execute it.

I was worried the night before the race because we went to see BILL COSBY (Ben's Father's Day gift.  I know, how cool is that?) and I wasn't sure if I'd get the rest I needed.  I wasn't about to give my tickets away, so I let the worry go.  I thoroughly enjoyed the show, practically wet my pants, Ben cried, he was laughing SO HARD.  It felt so good to laugh like that.

(This is a retarded, full-of-vanity side note, but, oh well, vanity is an issue with me sometimes--When you registered for the race you had to let them know what size racing shirt you wanted.  I said medium, not knowing that these were UNISEX sizes.  Well, when I picked up my shirt and racing number, it was HUGE!!  I felt like a big balloon.  I don't know about you, but when I run I want to feel trim and firm, not loose and baggy.  I felt like a sail on a huge ship!  I asked if I HAD to wear the shirt.  They said yes.  Well, I get to the race and most everyone else is in their cute racing gear and here I am, big-sail-boat Lanette, feeling lousy about myself in my need-to-wear racing shirt THAT NOBODY ELSE IS WEARING.  To make matters worse, I ran this race by myself so I didn't even have a friend to laugh about it with.  Picture me standing alone, feeling like a nerd, trying to stretch so I look like I'm doing something important.  Don't you feel sorry for me?  That's what I get for being a first-timer.  I'm a little wiser now.)

The morning was freezing and WINDY.  I nursed Sam while I scarfed down a banana.  The race started off great.  However, I realized what a slow runner I am compared to so many.  There are some pretty hardcore runners out there.  I THOUGHT I was a cool runner until I saw these guys.  I had to remind myself that I was racing for ME, not for anyone else, not to win anything, not to look good, just to prove to myself that I could do it.  I swallowed my pride and kept running.  I have to admit, it's hard to watch people passing you.  It's hard to feel like the slow one. 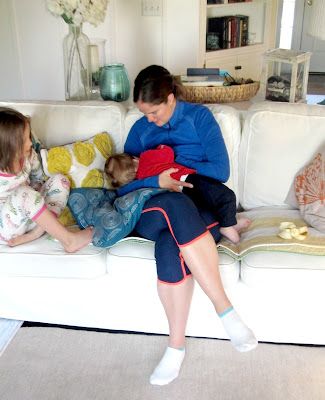 The trouble started around mile 4.  There's about five miles of incline, one large hill with lots of little hills as you're ascending.  Combined with the wind it was MISERABLE!  I'd hit a wall and thought I'd never finish.  There were moments when I wanted to sit down and cry.  I felt like for every step forward, the wind blew me two steps back (hah, maybe it was my billowing sail!).  I had to walk a couple of times on that hill, the wind was SO strong.  I hated myself for doing it, but I didn't train on hills and I should have.  I didn't realize how much harder it would be. Moments like this, your mind can take you to awful places.  I started feeling nauseous, I started to get a stomach ache, etc.  I had to "find a happy place."  I had to change my thoughts.  I had to keep looking forward.  I was NOT going to quit.  All I could do was just keep going.  So I did.

The last three miles, a 70 year-old man was in front of me.  70!  He had the most awkward run, but he kept going.  Man, that guy was determined.  I passed him on our descent, with about one mile left.  As I did, I said to him, "Sir, thank you, you really kept me going back there."  He smiled and told me how to maneuver down the last hill.  I figured he must have been a life-time runner.  What a guy.  I thought running down the hill at the end of the race would be a piece of cake.  Not so.  By then, my lungs were fine, but my legs were ready to stop.  It's hard to run downhill when your legs are mush.  I just wanted this stupid race to be over!

I came around the corner, heard the announcer calling names of people finishing ahead of me.  I looked to the right and saw my family.  I wanted to cry, but knew that if I did, I wouldn't be able to breathe. So I held it in.  And guess what?  Remember that old guy?  He totally sprinted ahead of me and beat me, the stinker!!  I had nothing left in me, I couldn't run any faster, so I pointed to the guy, looked at Ben, and raised my eyebrows.  He laughed. 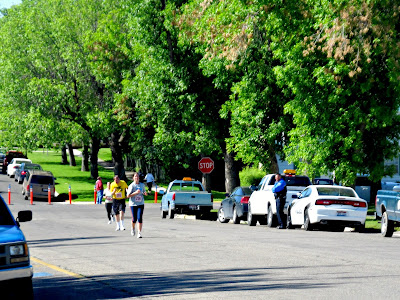 I crossed the line.  I don't even know my official time, because I didn't care, I just wanted to be done.  It was about 2.5 hours.  The hill kicked my bum.  I lost 30 minutes of time on that hill.  I'd wanted to finish in 2 hours, that was my pace in training.  It didn't happen.  Maybe next time?!!  (I took a little comfort in knowing that Katie Holmes ran the 2007 NYC marathon in about 5.5 hours, so, hey, Kate and I could've been running buddies at this pace.  Can you believe that I even remembered that little Katie Holmes trivia?!  Yep, I'm a nerd.  This proves it.)

This picture looks like I'm hugging my kids, and I am, but they're also holding me up because I was about to collapse :). 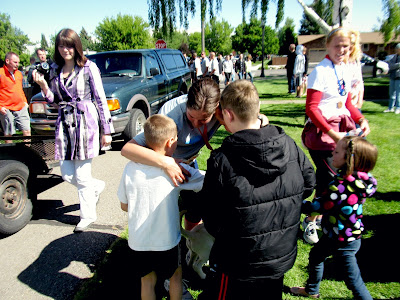 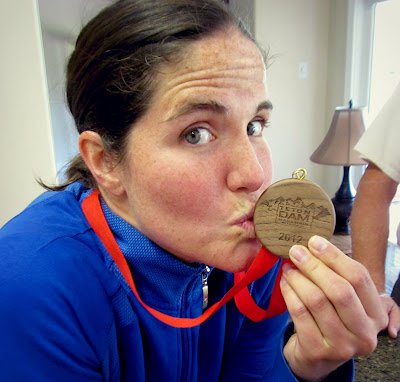 The rest of the day is a blur.  I took a HOT, HOT shower, slept for three hours, read a book, RELAXED.  My ears were hurting the rest of the day from the freezing wind blowing in them throughout the race.  And I had a nasty headache.  I asked myself a few times that day, Why do people LIKE doing this??  But I had to remind myself of all that I put into this race.  All the hard work.  All the time.  How I felt when I crossed the finish line.  And it WAS worth it. 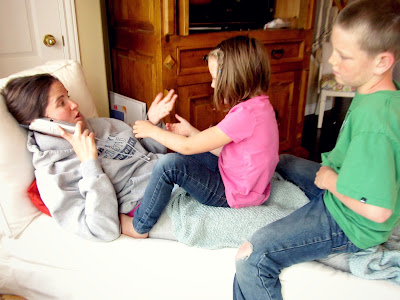 (this is as relaxing as it gets with kids around :)

It's true what they say, that the hardest things in life are usually those things that require the most out of us.  That stretch us.  That cause us to dig deep down inside ourselves, finding something within to carry us forward.  The kind of things that usually take looking back in hindsight to grasp, because they were too hard while in the thick of them to make sense of, but we did it, knowing it would be worth it in the end.

Those are the things worth doing.  And I did one of them.  And it's great.

The volunteer told you to wear the race shirt?! Next time don't listen to them :) At least it was a decent color (the year I ran it was neon green).

Hope your recovery goes well the next few days.

You did it, YOU DID IT! Congratulations!!
I totally understand the mentality side of it when you want to stop and cry. The worst feeling, but you did it-billowing sail and all. ;) (You totally cracked me up, chuckling, shaking the bed.) Good on ya, girl!

Hah! My quads are KILLING ME! I can't even sit down to go to the bathroom without screaming! And you better believe I will NOT feel like a sailboat next time:). Hopefully, I'll be as awesome as you and brave a marathon...yikes!

Oh, and congrats!! I just saw that you're expecting! I am FULL of sympathy for your nasty all-day sickness...I am so sorry. It's hard to feel like a good mom when all you want to do is die:(. I'm praying for you!!

congratulations. That is so awesome.

OKAY HONEY. I'M NOT SEEING IT ON YOUR BLOG, LADY. OR FACEBOOK. HALP.

Sounds like it was a rough run. I had one of those on Saturday myself and it was only 3.5 miles. Even though I really do like to run, during my half marathon i felt the same way. i just wanted to stop. I wanted to walk. Or sit down. From about mile 8-12 was just killer. That's when you have to dig in deep. Pull from your inner strength and just. keep. going. And you did!

so proud of you.

and sorry you felt like a billowing sail boat, haha! Can't believe they told you you had to wear the shirt!

now take the week off, you deserve it!

Good job! I'm proud of you! We should run a race together sometime.

Great post...and of course great job!
I loved the pic of you nursing right before the race...a true Mommie

congrats girl!! you almost make me want to try to run one... almost. i love that the old guy beat you. ha! i bet he told his grandkids all about it. :) did you go running today?